Muang On Cave in Chiang Mai

Located in Mae Sot just a short drive from San Kamphaeng Hot Springs and 30km from the northern city of Chiang Mai, the Muang On Cave is a place of legends, Buddhist and animistic traditions and spectacular natural formations.

Little-known except to local people, it’s far less crowded than many of Chiang Mai’s other attractions and gives a rare glimpse into the unique culture of the former Lanna Kingdom.

Set just off route 1317, the entrance is via a steep Naga-flanked stairway running to halfway up the hill, lined with trees home to colonies of monkeys. Exploring the caves is not for the fainthearted, as the rock openings are tight and stairways are steep, but it’s well worth the effort for the natural beauty in spite of a lack of Western-style safety features. A powerful torch or even a headlamp is the best way to see into the gloomy corners and narrow passageways. 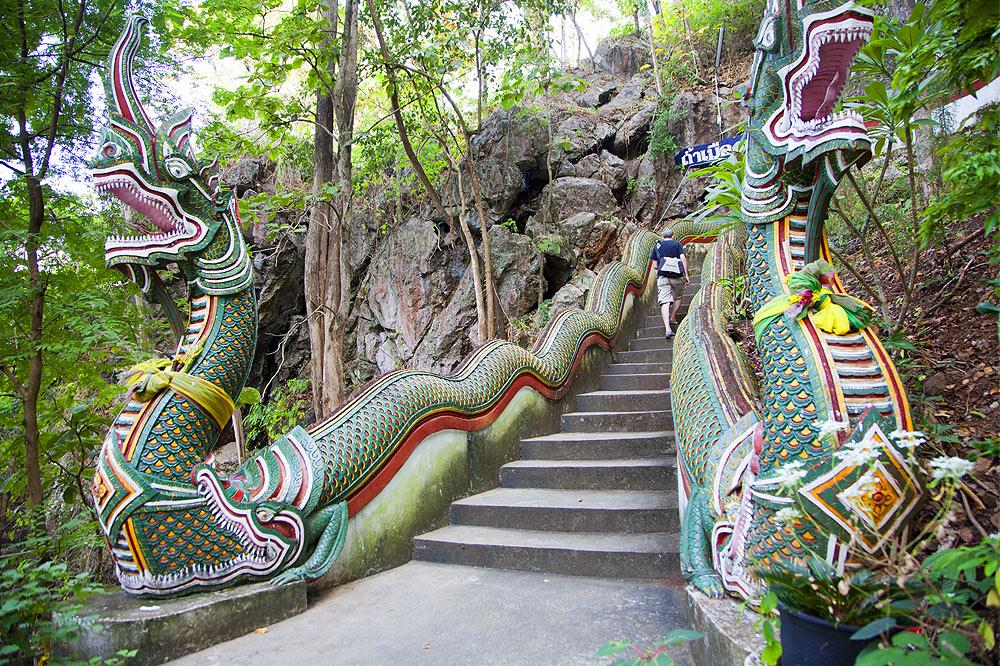 The Chiang Do Cave system on the outskirts of Chiang Mai is larger and more labyrinthine, but Muang On is just as stunning.  Visitors may notice that the cave walls are naturally smooth and rounded in the shape of the swirling pools of water that formed them over thousands of years.

Walking down steep stairs, visitors pass by grottos dotted with fluorescent-lit shrines.  The main cavern floor is dominated by a 30-foot long reclining Buddha statue with a fossilised dinosaur skeleton placed above it. 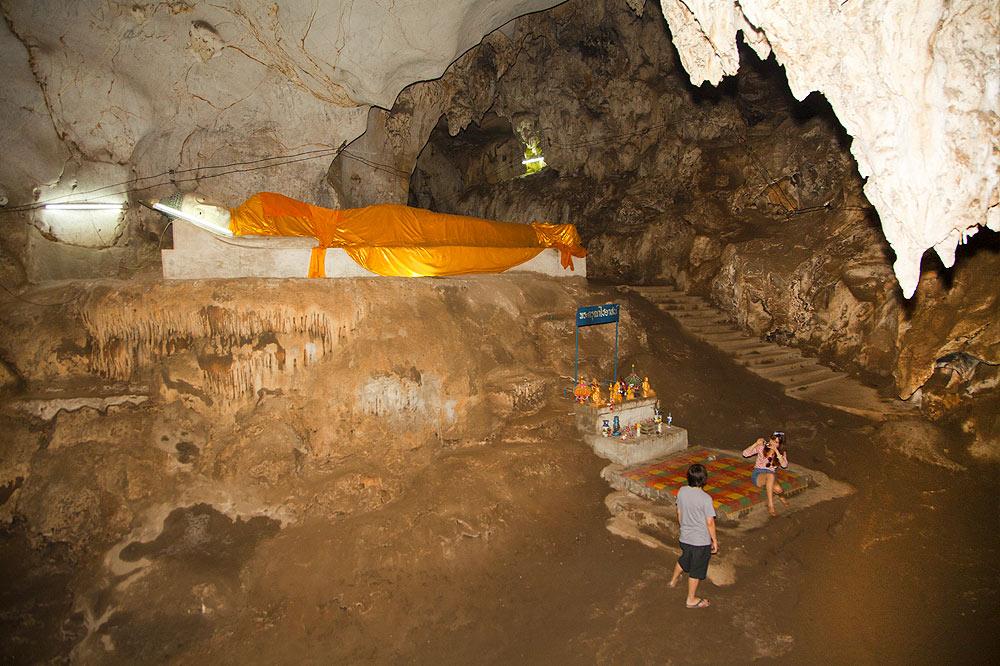 The winding caves are home to thousands of natural stalactites and stalagmites, and a concrete pathway allows visitors to wander past the dozens of shrines.A gigantic stalagmite that locals named Jedee Mae Nomm Fah is thirty feet high and ten feet in diameter.  Several brightly-colored sashes are wrapped around it, producing a surreal effect.  It’s best to take one’s time exploring the cave’s many nooks and crannies, but Jedee Mae Nomm Fah is a relatively hard marvel to miss. 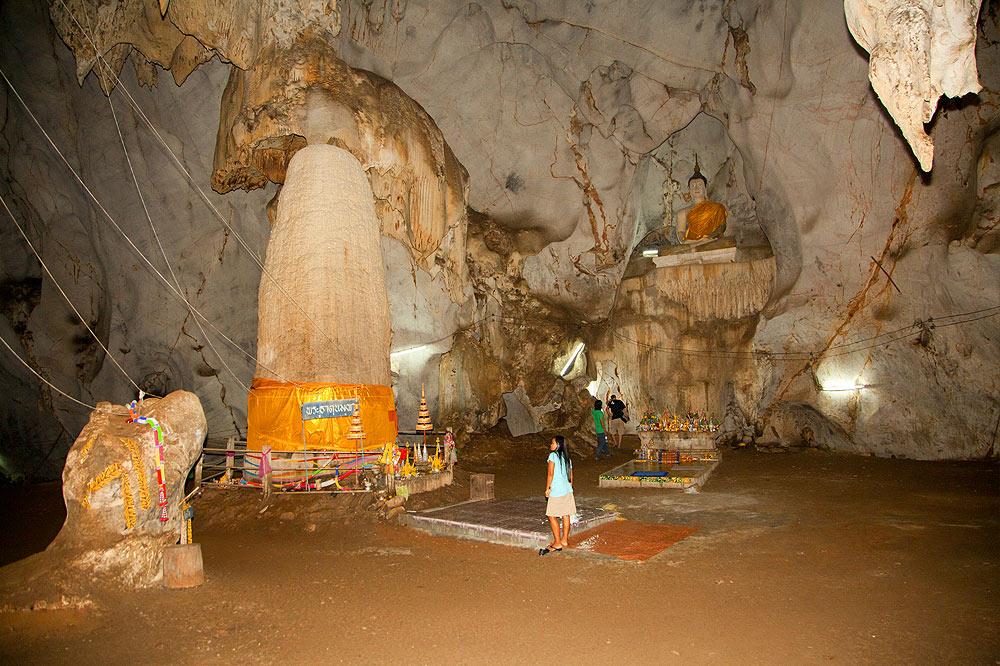 The caverns are sacred to the Buddha, legendarily the first visitor to their mysterious depths. During his visit, the resident Naga serpent demon disturbed his meditation by taking human form and presenting offerings, and a relic in the form of a hair from the head of the Buddha is still venerated here. Offerings left by the religious crowd the cave walls and floors, usually mimicking nearby, similarly-shaped stalactites. The views from the cave over the Ping River Valley are superb, reaching as far as the mountains on the opposite side of the massive, flat plain. 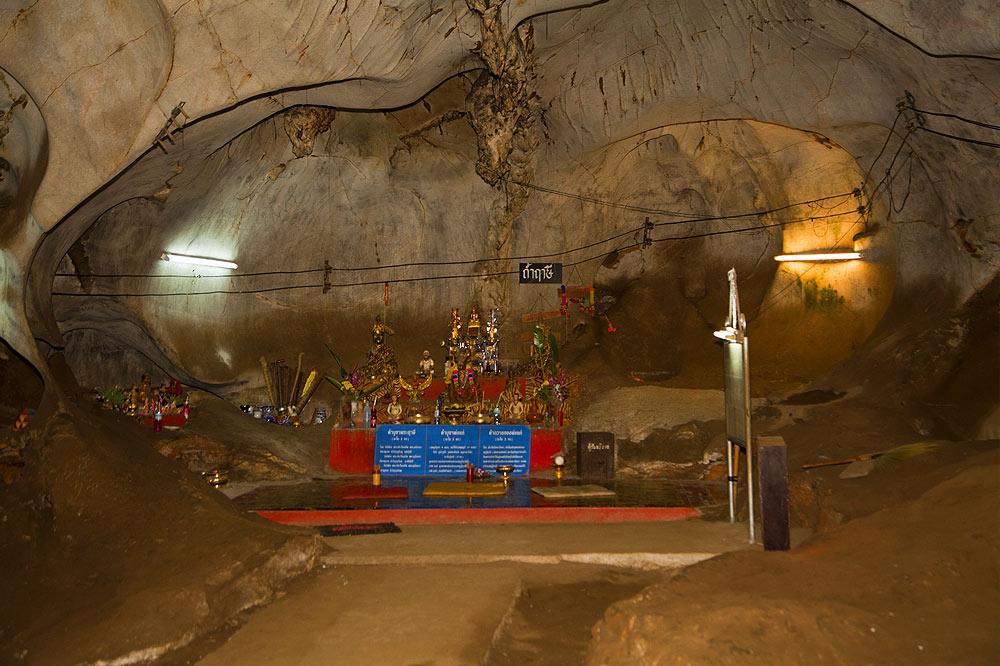 Local legend has it that locals were able to hide out in Muang On caves when the area was invaded by Burmese armies.  The Thai villagers would gather their essential belongings and food supplies before seeking refuge in the sheltering caves.Today, a trip to Muang On Cave makes for a memorable day trip, especially when combined with a restorative visit to the nearby Hot Springs.